Result has been achieved on 31 July 2022 in month 20 of the project (results documented in Work Package 4 of the planned result: Universal self-healing energy management strategy).

The objective has been the development of a more detailed simulation scenario that will facilitate the virtual verification and adjustment of the control gains under different system conditions in Task 4.1 and Task 4.2, as well as the upscaling of the proposed EMS variants in Task 4.4 for providing a wider range of grid services.

The EMS simulation models built in Task 4.1.1 have been first combined with the medium-fidelity models of the high-energy (HE) and high-power (HP) battery packs, which estimate, among other things, the evolution of their state of charge (SoC), their state of health (SoH), the pack temperatures and the internal electrical dynamics. Then, the efficiency maps of the power converters have been incorporated to estimate the overall converter efficiency, and to carry out a more advanced power allocation between the parallel converters with the aim of maximizing the system efficiency. Lastly, a simplified model of a microgrid has been implemented to make it possible to evaluate the performance of the inertia-emulation algorithm in Use case 3. This model has been generated with two fidelity levels: in one of the models the power balance of the microgrid is fed into an aggregated first-order function of the system; in the second model, the microgrid topology is modelled by means of a power flow algorithm, and it is combined with the dynamic models of the grid-connected devices (a diesel generator, a PV plant, the load profile and the iSTORMY HESS). These two models provide the system’s frequency calculated based on the power provided by all the grid-connected devices. The general diagram of the Simulink system-level model for Use case 3 can be observed in Figure 1. 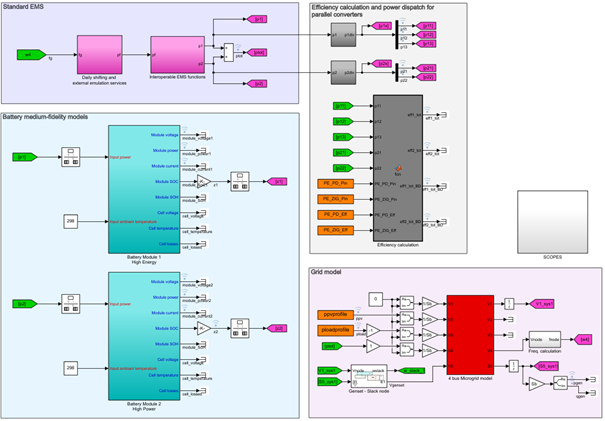 The developed medium-fidelity models have been employed to carry out a more realistic simulation of the EMS variants proposed in Task 4.1, and some of the results for Use case 1 and 2 will be published at the conference IECON that will be held in Brussels in October 2022 [1].

In addition, these simulation models will be used in the framework of Task 4.1.3 to adjust the control gains and verify the EMS under different system conditions. Moreover, these models will be used as a basis for simulating the self-healing EMS strategies being developed in Task 4.2 and for carrying out the upscaling of the iSTORMY solution in Task 4.4.